Videos are powerful marketing tools. For mobile apps, a good video can compel users to check out an app listing or inspire them to install it once they are there. Whether a video is on the App Store / Play Store or an ad external from the app stores, it can have a big impact on a user’s perception of what the app has to offer.

Whenever you launch a video, you’ll want to make sure it’s appealing to as many users as possible. This is essential for your App Store Optimization initiatives – the process of improving your visibility and conversions on the app stores. So, how can you tell what users like the most? Will certain features appeal more to them? How do you know it’s working and what’s not?

Fortunately, there is an easy way to determine what videos work best: A/B testing. Whether your video is on the Apple App Store, Google Play Store or off-store marketing like Facebook ad campaigns, running A/B tests will help you ensure each video is optimized. 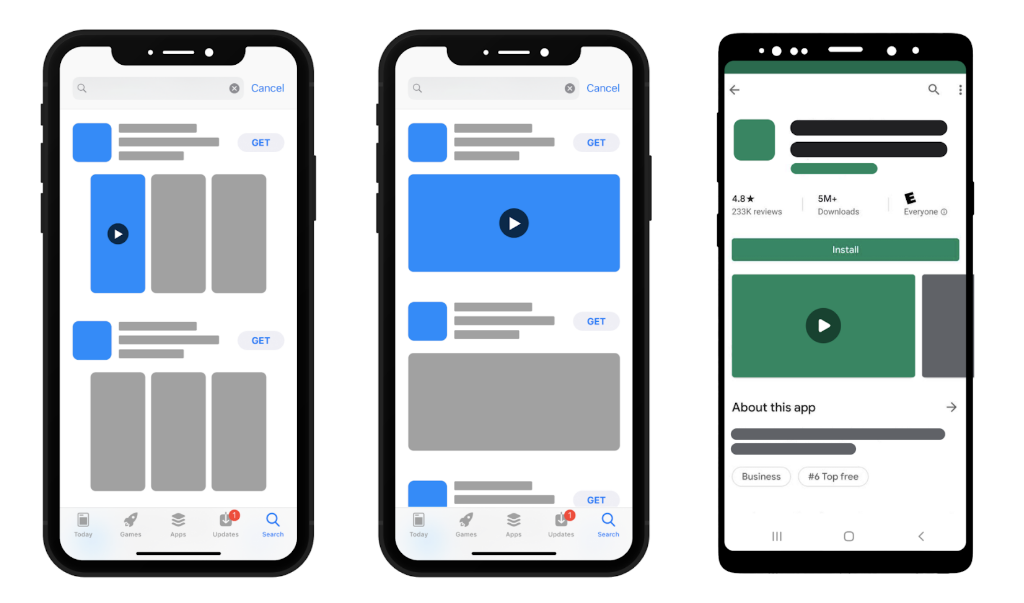 When users find an app while searching the Apple App Store, the video will be the first creative displayed both in search results and on the store listing – the page on the App Store containing your app information, screenshots and description. This means your video will make the first impression and must capture the user’s interest, often before they even visit the full page. Videos are not a required element like screenshots are- apps with videos definitely stand out from their static competition.

How your video is designed will also impact how it’s displayed. If the video is in landscape mode, it will be the only creative asset shown in search. On the other hand, portrait-mode videos will appear alongside the first two screenshots. The native orientation of your app doesn’t necessarily dictate video orientation in the iOS App Store, so both should be tested for optimal conversion.

Impact of Video on ASO

How important is each click? Beyond bringing individual users to your app, a tested and optimized video can improve your positioning in the App Store.

Your video can impact how many clicks and installs your app receives when users see it, which helps with your optimization. The stores’ algorithms take the click-through rate (CTR) into account when determining rankings, so improved clicks per keyword results in improved rankings. This means that a good video can help boost your keyword rankings by engaging with users and getting them to click on the app.

The boosted keyword rankings can make it even easier for users to find your app in searches, providing more opportunities for your video to reach people. Think of it as a feedback loop that empowers growth.

Since your App Store video can affect traffic and improve your organic footprint, you’ll want to make sure it’s achieving the desired results and increasing your conversions. You can test videos as part of your creative sets through Apple Search Ads.

Search Ads lets you test different creatives in different ad groups. This will help you identify what users respond well when the video is served to them in an ad. Apple allows for up to three videos, which can all be run in tests using Search Ads. With information on which ones convert best and for which ad groups, you can refine future videos to ensure continued growth.

Whether a user sees the app through searches or ads, your Google Play Store listing will act as the main landing page for your app. The video will be one of the first things users see there, so it needs to be able to convince users to download the app.

Your video can impact all traffic hitting your app store, including the performance of your paid marketing. As with Apple, the clicks and conversions your app gains will influence its ranking for keywords.

The Google Play Developer Console allows app developers to run experiments for their store listings. Unlike Apple, Google Play’s experiments are run to all traffic, rather than just through paid ads. These experiments are in-store A/B tests that display different variations to a split audience, then tracks the metrics to see which version gains more clicks and installs. While Apple servers your video based on machine learning, you can set the traffic percentage for Google Play experiments and run a full 50/50 test on all traffic on the Play Store.

These experiments are excellent for determining what videos users prefer. They can be used to test variants like different featured graphics or entirely different Promo Videos, although it’s advised to only test one change at a time.

After running the experiments, you can see which videos resulted in more conversions. The winning variant can then be deployed in the Play Store while the elements of that video that made the difference can be identified, built upon and further tested.

Using a video in marketing initiatives outside of the App Store and Play Store can also benefit your mobile app downloads. Outside of optimizing your organic store listings, Facebook Ads are a great way to target quality, engaged users. Facebook users will see the videos in a different environment than on the app stores, so the videos should be tailored to their experience as well as tested and optimized.

One major difference between Facebook video ads and videos in app listings is the ongoing need for video footage. While ongoing video is important for the storefronts as well, it’s especially critical to generate large amounts of video content for Facebook Ad campaigns to perform on an ongoing basis. One variant will not convert the same for all users, so testing different versions for different campaigns is a must.

Facebook video advertisements must also consider aspect ratios and the platforms they’re available on. Videos made on Facebook Ads can be displayed on Facebook, Instagram, Messenger and on apps through Facebook Audience Network. How well a video performs will vary by platform, so the user’s viewing platform should be taken into consideration.

Facebook ads can also provide valuable datasets based on how well they perform. The conversions you gain from different demographics can help determine what groups of users like about your app or respond well to.

When you begin a video ad campaign, you’ll want to make multiple versions and test them to identify what works best for your campaign. This will help ensure the most cost-effective video production campaign and best returns on your investment. In general, video ads tend to perform better than static assets or gifs, although this can vary from campaign to campaign.

The information you gain from your Facebook video can be applied to your App Store and Play Store videos as well. Information on what users respond best to, demographic information and so forth can be applied across the stores. Keep in mind that the user experience on Facebook is different from that on the app stores and each platform has different guidelines the videos must comply to, so they must still be tailored and tested for each platform.

The goal is to align messaging throughout the acquisition funnel and create a cohesive strategy to each store. This creates a funnel between the platforms, leading to a better conversion rate everywhere.

If you want your app to grow and gain installs, you need to incorporate the different types of creatives available for promoting it. A video can be especially useful, but a good video needs to be tested to gauge user feedback and optimized.

If you want your video to appeal to users and help you gain conversions, you’ll need to A/B test it. Whether the video is for the Apple App Store, Google Play Store or a Facebook advertisement, proper A/B tests and iterations can help your video achieve better installs organically and through paid campaigns.

Gummicube is a global leader in App Store Optimization with more than 11 years of experience optimizing and marketing apps. We offer the leading enterprise ASO technology and agency services, providing support to clients around the world. Our company is trusted by thousands of enterprise brands and leading startups including Microsoft, LinkedIn, Bethesda, SWEAT, GrubHub, McAfee and many others.