A major player headquartered in Japan, DENSO Corp. specializes in advanced systems and technology and is the largest manufacturer of alternators in the world. The PowerEdge series of Alternators offer the most efficiency available from any manufacturer, so the goal of the spot was to debut the innovative design concept and spotlight the exclusive benefits of durability, longer battery life, fuel economy, and ultimately, lower operating costs for commercial fleets.

Sparkhouse partnered with Southern California ad pros IMW Agency for the project, filming overnight on location at the Inland Kenworth dealership in Carson, California. The team was comprised of a talented crew, including director Alex Meader, director of photography Connor Hair and Sparkhouse CEO Torrey Tayenaka as creative producer. To achieve the cinematic and fluid look the team was aiming for, the location filming was done with a Technocrane to capture the branding elements and cutting-edge appeal of the new line.

“With this project we really wanted to blend the feeling of ruggedness and durability that comes to mind with commercial trucks and diesel engines with a sense of sleekness and intelligence that would reflect the elegant engineering of the Power Edge series,” says director Alex Meader.
“From the performances, to the cinematography to the sound design and music— it was all driven by this central idea that we felt told the DENSO story in an elegant way.” 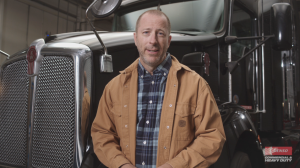 “Sparkhouse adds the creativity and technical expertise that takes your project from good to great!”
— Peter Bretschger, Co-President/CMO, IMW Agency