When working on a video marketing campaigns, you may hear the term “storyboard” thrown around a lot. At the most basic level, a storyboard is a visual representation of the planned shots that will be included in a video. Think of it as a graphic roadmap detailing every scene in your story. Photos, sketches, illustrations and even still photos of stock video footage may be used to compile a storyboard, and most of them include text that spells out what’s happening in each scene. Generally, the storyboard is assembled after the production team has created a shot list.

Just like it sounds, the shot list is a list of every varying shot-shorthand for a specific video footage clip-that needs to be captured on shoot day. A single scene may require multiple shots in order to show various angles of the characters or items. Each shot on the list has a brief description of the type of shot, location, character action, and any dialogue or voice over that will be spoken during the shot. 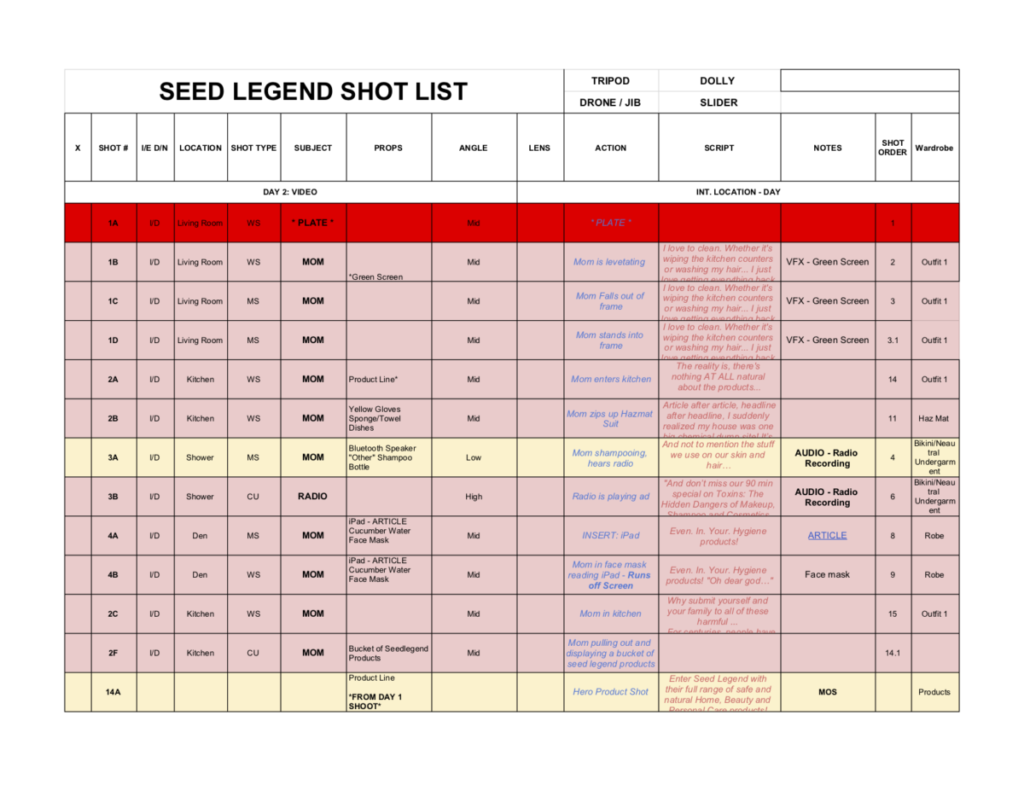 The goal of a storyboard is to graphically display the shot list vision and get everyone on the same page as far as what the director is imagining for each shot and scene. Not only is it a great way to make sure all of the production people are pointed in the right direction, but the storyboard is also a crucial deliverable the client will need to sign off on before shooting begins. If anything needs to be tweaked within the storyboard, the clients and creative team can work together to refine it at this stage, instead of wasting valuable time and budget on reshoots later.

Creative teams use different variations of storyboards that really accomplish the same thing, just at different levels of complexity. The type of video production you are making will ultimately help determine which storyboard format is used to clearly map out the story’s flow.

One of the easiest ways to create a storyboard is to walk through the shot list and take photos using either a digital camera or a smartphone. These carefully planned photos serve to visually describe each shot.

Here’s an example of a photo storyboard: 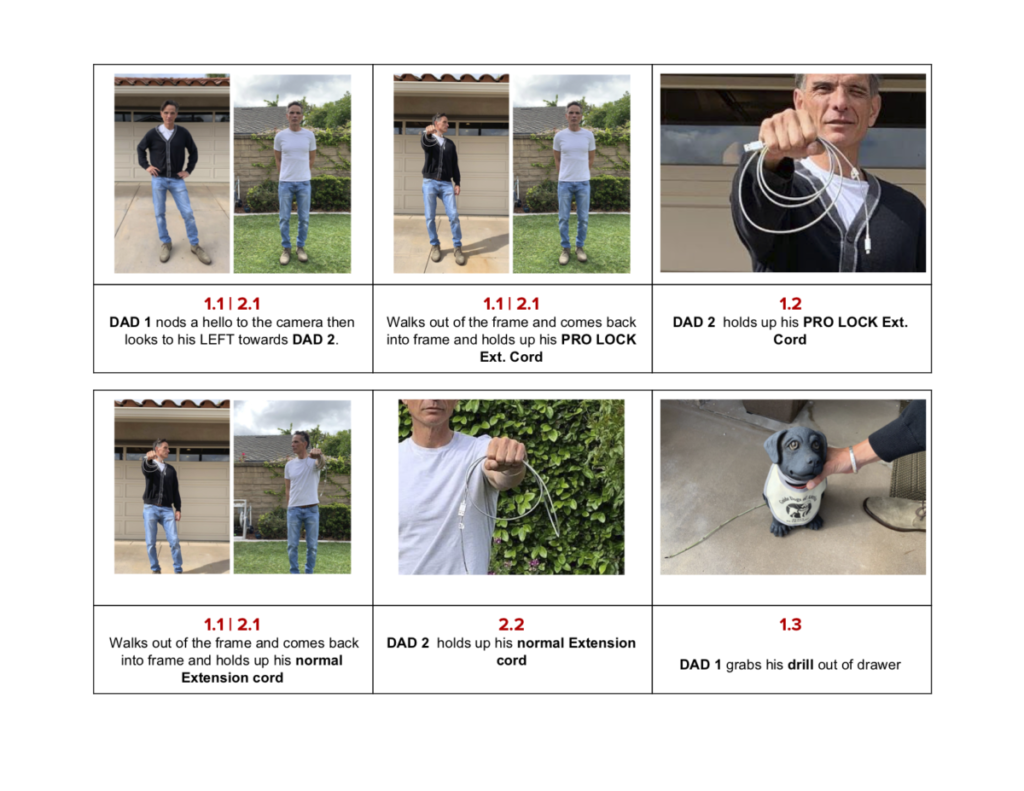 Here is the final result of the photo storyboards

You only need to show as much as it takes to explain the shot. So when it comes to storyboards, if you can get your point across without a full-color illustration, then a quick sketch may be all that is needed to get everyone on your team working together.

Here are some rough sketched storyboards:

Here is the final result

The full-color format isn’t usually necessary for storyboards. But when you have a client with multiple stakeholders or you need to convince the client or team of your vision, color storyboards can really elevate the presentation.

Here are some color storyboards for an animation (yes, you need them for animated videos, as well): 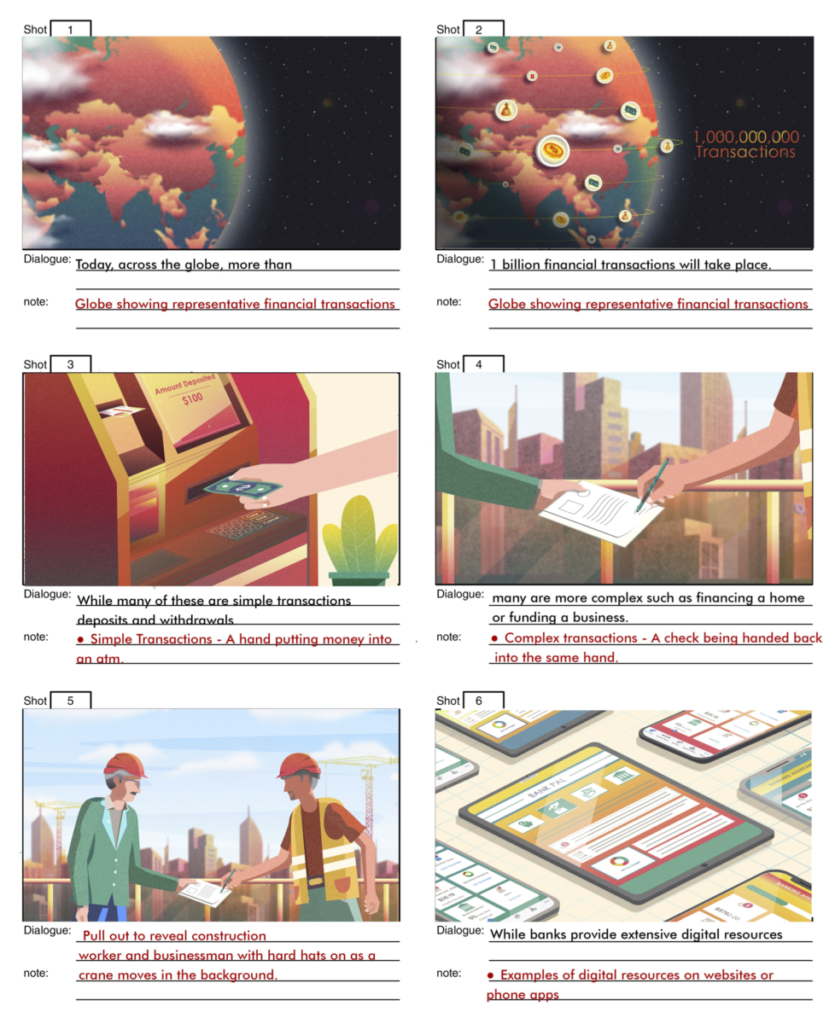 Here is the final result:

What to include in a storyboard

In addition to the collection of visuals that accurately reflect your video’s grand vision, there are additional elements you should work in to make your storyboards as useful as possible.

It’s always good to have the script referenced in your storyboards, so you know what you will be hearing during each frame. Plus, the script details will help to highlight anything that might be off, like wrong visuals, missing shots, etc.

Since you are creating your storyboard off of your shot list, be sure to include the shot number so that anyone working on the production can easily tell what exactly a particular shot is referencing.

Oftentimes storyboards will incorporate shooting direction-such as “dolly in,” “pan right,” etc. Since these shots aren’t moving yet, you need to mark them up to make sure everyone on set is aware of the movement that’s planned (if any).

Adding notes to help further explain and clarify the scenes in a storyboard can be especially helpful in making sure there’s no confusion regarding the plan before getting into production.

A storyboard done right succeeds in uniting the production team and client in a shared vision so that there are no surprises on set or in the editing room. The more detailed the storyboard step is, the better prepared you will be to make a terrific video that accomplishes all of the goals you set out to hit.

Need a video to help grow your business?